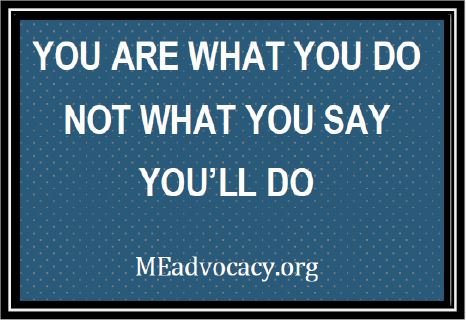 Dr. Francis Collins, director of the NIH, in a statement of October 2015, promised the ME/CFS community that he will take actions to bolster research on the disease.  He assured us by stating that he will “intensely study individuals with ME/CFS”.  Among other promises, he revealed that an intramural study at the NIH clinic will commence shortly involving researchers from several of NIH’s institutes including NINDS.  This news of renewed interest by NIH toward ME/CFS research was highly praised by many advocates, patient organizations and non-profit research organizations.

Recently, it was revealed that Dr. Avindra Nath, chief of infections of the nervous system section of the NINDS will be presenting at the CDC Grand Rounds meeting on February 16, 2016.  His topic of discussion will be "Post-Infectious Chronic Fatigue Syndrome: Intramural Research at the National Institutes of Health".  The news that such a well respected researcher was getting involved with ME/CFS was hailed by advocates as proof that NIH means business this time.

MEadvocacy issued a blog warning of the premature sentiments of satisfaction: “Why MEadvocacy Does Not Applaud the News from NIH...Yet”.  We explained why we were skeptical of these promises based on previous biased actions by NIH and CDC toward ME patients.  In addition, we pointed out that these were just mere words.  We were holding our applause until we saw tangible actions.

The announcement of NIH’s recruitment request for the promised intramural study has come out. The heading for the study states ‘chronic fatigue syndrome’ but, to be accurate, they should have left the word “syndrome” out.  It is basically a study of “unexplained fatigue”.  If one would have paid attention to Dr. Collins words when he appeared on the Charlie Rose Show, they would have noticed his specific verbiage; “by understanding fatigue in CFS, it will lead to understanding fatigue in other illnesses like cancer.”  He was not hiding the fact that what he is interested in is the study of the symptom fatigue.

It is not surprising that Dr. Collins is interested solely in the fatigue symptom.  He had stated when interviewed by Charlie Rose: “But chronic fatigue syndrome - people who have that diagnosis... it's a very heterogeneous collection of individuals, but The Institute of Medicine has just sort of defined what we should sort of limit it to is people who are profoundly affected by fatigue, often times coming on after an acute…”  This was his take away from the one million dollar government funded IOM report.

The background of the study states: “Post-infectious chronic fatigue syndrome (PI-CFS) refers to long-lasting fatigue and inability to exercise that can occur after a person has an infection. It can also cause pain, sleep problems, depression, and anxiety. Researchers want to learn more about its causes.” - It is talking about the symptom fatigue which can also cause other symptoms.  There is no mention of the distinct neuroimmune disease, ME.

Dr. Collins previously stated that the study will include 40 patients.  Now we see that the study will include patients who suffer with chronic fatigue after an infection as well as recovered patients from Lyme disease, those with functional movement disorder (aka neurological movement symptoms related to conversion disorder, psychogenic origin) and healthy controls. If the total remains at 40 patients, it will mean an average of ten for each group.

Which research criteria do you think was chosen for this new effort in ME/CFS in 2016, post the IOM and P2P reports?  Did you guess the Empirical - 2005 Reeves criteria?It selects a much larger patient population than the Fukuda and includes non-CFS patients that have primary depression, and other causes of idiopathic fatigue (see Jason paper).  This criteria was created by the CDC’s William Reeves, Elizabeth Unger, James Jones, Suzanne Vernon, et al.  It was highly contested for its many flaws by experts and stakeholders.  Patient and advocate, Mary Schweitzer, wrote a scathing blog about all the deceptions in the making of this criteria. She called out the co-authors of this criteria by stating: “I am now handing it to the community - and the co-authors, who share responsibility even if they worked on a different task in the study - to get something done. Public apology and public retraction - nothing less.”

A petition started by Tom Kindlon in 2009, against the 2005 Reeves criteria, has 2,672 signatures. This is just another case of the ongoing bias by NIH/CDC of ignoring ME patients’ voices.

The difficulty with this proposed study is not only the poor choice of criteria.  There are further issues that prevent ME patients from participating.  For example, patients will be asked to perform a bike exercise test twice, so that they should be tired.  This will exclude most ME patients since this type of testing has proven to be harmful to them.  Some of the exclusions demanded by this study process will ensure that ME patients will not be selected,  for example, excluding patients with current immunological disorders and active infections.  ME patients are known to suffer from immune dysfunction as well as with viral and enteroviral infections. This exclusion would disallow them from the study. This is akin to doing a study on Multiple Sclerosis but not including anyone with MS symptoms.

In addition, comparing an ME cohort with ambiguous conditions such as psychogenic functional movement disorders/conversion disorders would only confound the study results.  If comparisons should be made, then comparing ME cohorts to similar diseases such as MS or seronegative post-Lyme disease syndrome would be more appropriate.  But with such a limited sample size, comparing ME cohort with a healthy control cohort would be better use of resources in trying to make advancement on understanding the biomedical signature of ME.

The principal investigator of the study is Dr. Avindra Nath the Clinical Director of NIND’s Division of Intramural Research.  He was recently highly saluted by advocates because of his many accomplishments.  Further digging, however, unveiled a different story.  In a personal account by a patient suffering from the neuroimmune disease ME, who went to see him as a neurologist, the patient was told; “one doctor you don’t have to see anymore is me.” (i.e. there is no neurological component to whatever is ailing you).

Dr. Francis Collins, the director of NIH, spread promises to the ME/CFS community.  He accomplished this with a media covered NIH announcement.  This was followed with personal phone calls to targeted advocates and a non-profit “research” organization.  He mentioned it at a radio interview and followed up with a phone interview by a journalist.

This hype gave false hope to a community that has been maltreated and neglected by the US health agencies for decades.

Promises were widely made that now that the well respected IOM and P2P reports have been published, things will change for the long suffering patients.  NIH funding will be greatly increased and the disease will be widely recognized as the serious debilitating disease it is.

Shortly after all these promises, the replies to the Chronic Fatigue Syndrome Advisory Committee’s (CFSAC) August 2015 recommendations were revealed.  The negative, empty replies were the first actions that showed that it was business as usual.  An RFA which was requested was squarely declined.  The call for the CCC to be used for research purposes was not even respected with a reply - it was hastily dismissed.Finally, the much anticipated intramural study which Dr. Collins spoke about, has been revealed to be a real scam.  It is not even a study of ME/CFS.  It is a study of the symptom ‘fatigue”.  There is no post exertional malaise (PEM) mandatory with this criteria.

It is very clear that Dr. Collins is not interested in tackling the neuroimmune disease ME.  He is interested in the symptom “fatigue” which appearms in many chronic illnesses.  The fact that he is falsifying the real purpose of this study and is incorrectly attributing it to ME/CFS funding is perverted and inexcusable.  This is nothing new at NIH/CDC.  In a letter to Dr. Keiji Fukuda from Dr. Stephen Straus (NIAID’s Chief of Laboratory of Clinical Investigation), Strauss states: “My own sense is that a few years of use in the field will once again verify that there is no demonstrable or reproducible difference between individuals who meet the full CFS criteria and those who can be said to suffer idiopathic Chronic Fatigue." (2nd page of letter)

We would be much better off not having this study at all.  Dr. Nath will present it at the CDC Grand Rounds to thousands of clinicians nationwide who don’t know much about the disease.  They will believe that this is what the disease is all about - fatigue.  To top it off, Collins can claim that he has funded ME/CFS with this fake study.

Anyone who is familiar with the history of the institutional bias toward this disease understands that nothing will change until we change our tactics. Sending letters with questions, pleading with heads of agencies, testifying at CFSAC, having a seat at the table of workgroups has not resulted in meaningful change. Advocates have worked tirelessly to try to make a difference.  Many of these long time advocates have aggravated their disease state due to their efforts.  They finally wear out and because of the severity of their symptoms, need to fall back.  The government understands this and knows they can outlast us.  That is how morally evil this institutional bias is.

All this government malfeasance reveals the importance of adopting an ME criteria.  As stated in the preface to the ICC, its authors explain the need for accurate definitions: “There is a poignant need to untangle the web of confusion caused by mixing diverse and often overly inclusive patient populations in one heterogeneous, multi-rubric pot called ‘chronic fatigue syndrome’. We believe this is the foremost cause of diluted and inconsistent research findings, which hinders progress, fosters skepticism, and wastes limited research monies.”  All other “CFS” criteria were created with the purpose to conceal ME which has its own coding in the new US ICD-10-CM neurological G-section as opposed to CFS which is in the R-section of ill defined conditions.

Unless we rise up with a large scale unified revolution that is media worthy and bring shame to the culprits, nothing will change.  How long will we accept this type of maltreatment from NIH?  We have been the victims of this abuse for way too long.

We need to rise up and say enough is enough!

Please sign and share the petition located at this link:  “NIH/CDC: Stop the CFS Study Using Reeves Definition & Cancel the Study’s Presentation at the Feb. 16th CDC Grand Rounds” (The deadline to sign the petition is Sunday February 14th, at midnight. It will be delivered Monday morning February 15th.)

Some sample tweets that you can easily copy and paste or just visit @MEadvocacy_org click ❤ and retweet them:

@NIHDirector @DrFriedenCDC - #PWME need ME criteria describing neuroimmune disease. Holding back on this is negligence and malfeasance.

@NIHDirector @DrFriedenCDC -"Fatigue" study using Reeves is not #MECFS. Promises to fund #MECFS is hollow. #PWME will not accept this bias.