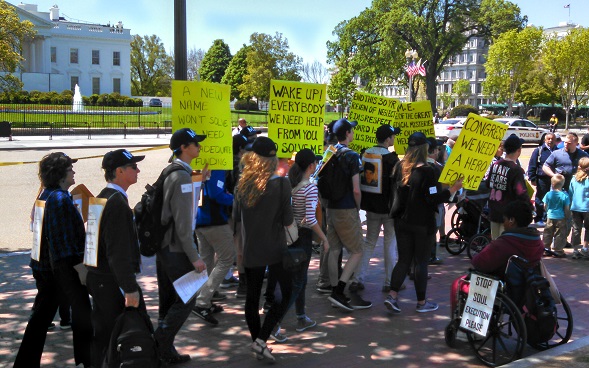 Late Monday, our ME Advocate coordinator arrived in Washington DC. missing her luggage!  With perseverance, the luggage was found, but our poor demonstration signs did not survive the trip.  Onward she prevailed through the night re-creating the signs for our stand-in protesters.

Tuesday 8:30 am, traveling to George Washington University to round up our student stand-in protesters; group of 18 protesters in all.  We aimed for the maximum number before permits would be required.  Such short notice, meant no time to obtain permits.

Each future demonstration, we expect to grow.  Sunny weather meant no rain to deal with like the March mini-demonstration.  That means more people are out and about in the streets of DC. The group soon gathered at Independence Avenue S.E. entrance across from the Rayburn building.  10:00 am, “Time to be Heard!”  The demonstrators engaged passers by, passing out “fact sheets” about ME.

By 11:05 am, our “blue capped” protesters traveled across the city in 5 cabs on the way to the White House! What a sight with 5 cabs arriving simultaneously with 18 blue capped demonstrators stepping out, holding signs and carrying large pictures of patients in the front and back around their necks.  Another snag; the direct street in front of the White House was closed off due to the visit by the prime minister of Japan!  The demonstration moved to the park area and took the time to read off some of the patients’ bios. The students were real troopers, enjoying the fact that they were helping sick patients do what they couldn’t do themselves. What a great show of enthusiasm!

We had a very busy twittering campaign, running simultaneously with the Act Up for ME Demonstration in Washington DC.  We used the hashtags:  # ACTUP4ME - # MyalgicE - # NeuroME - # MECFS and # MEadvocacy to raise awareness for the event.  Patients were asked to tweet their US representatives using this image.

In addition, MEAdvocacy ran a vigorous campaign, with the simple “one click” app. The message to our US representatives; “we need $250 million in funding for ME”. So far, the stats are pretty impressive.  As of tonight, the “one click” letter has been used by 108 signatures. Each signature reaches 3 representatives; making it a total of 324 letters!

We are a small group of crashed but grateful volunteers and very happy to have had a chance to represent the voice of the ME patient in Washington DC. Our first attempt at “Boots on the Ground” for ME patients has been a great success. More pictures and video to follow.

Our thanks goes to Susan Kreutzer for coordinating and representing us so well in DC!

and last but not least

Thank you to all our supporters!