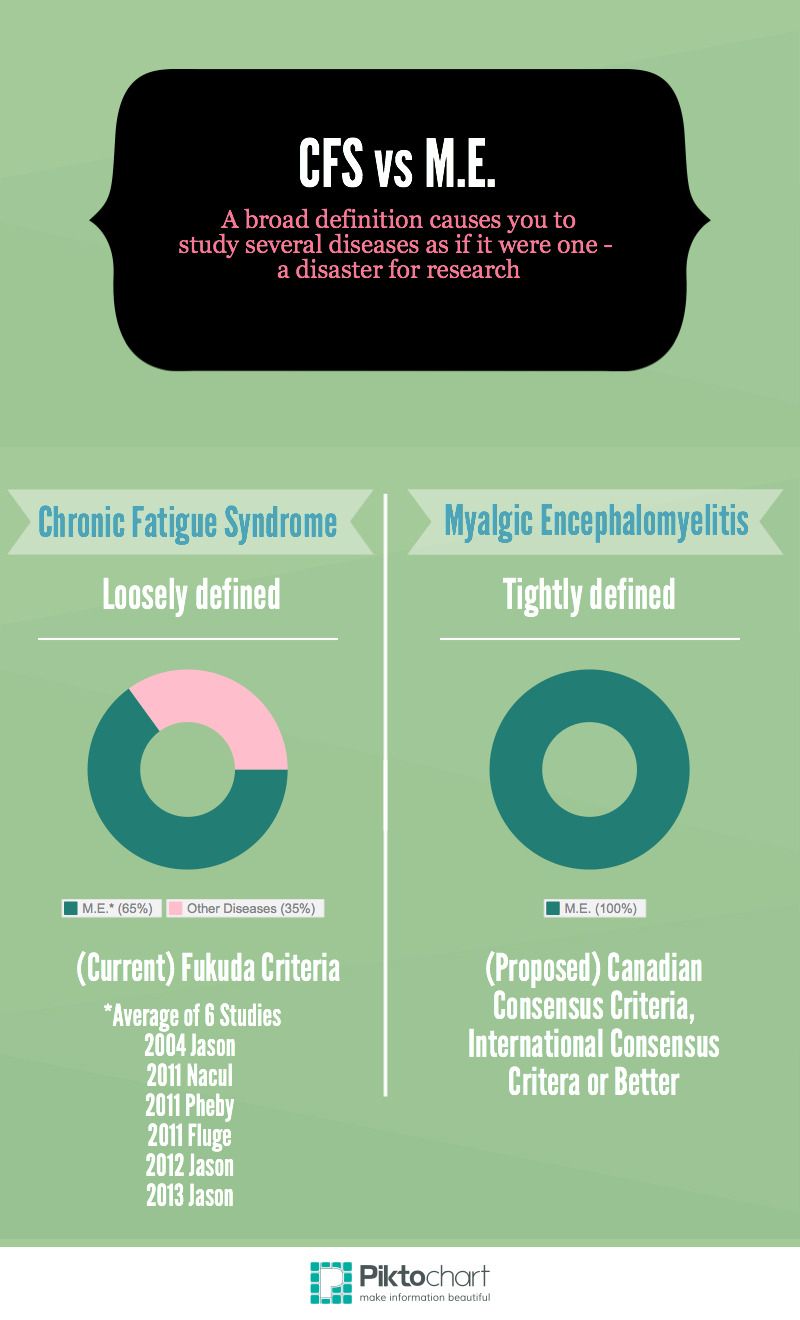 This is the second in a series of articles explaining our goals. The second goal is get a true myalgic encephalomyelitis (ME) definition established.

A great metaphor for chronic fatigue syndrome (CFS) is the chimera – a ferocious creature from Greek mythology. The chimera is made up of several creatures, the head of a lion, the body of a goat, and a snake for a tail. The Miriam-Webster dictionary puts it like this - “an imaginary monster compounded of incongruous parts.”

What does this have to do with CFS? The 1994 Fukuda case definition for CFS is very loosely defined with an overly broad reach. Like the chimera, it describes many different and unrelated “animals” all mashed into one – not only myalgic encephalomyelitis (ME), but also major depression, iodiopathic chronic fatigue, and undiagnosed major illnesses, such as multiple sclerosis*. This is called a low specificity definition, i.e., attempting to define ME, but hitting far from the mark.

This is one reason why researchers have a tough time coming to any conclusions regarding CFS, and why the patient population is often described as heterogenous (not all the same) – because they aren’t!

As you can see from the infographic above, based on average of six studies comparing the Fukuda Criteria (the current CFS definition), to the Canadian Consensus Criteria (the most widely used ME definition), 65% of people diagnosed with CFS have ME, while 35% do not. That means all the studies to date using the Fukuda Criteria include a large percentage of people who do not have ME. This has been going on since 1994.

In contrast, our proposed true ME definition (the Canadian Consensus Criteria, International Consensus Criteria, or better) is a tightly defined, or high specificity definition. It defines ME and nothing else. Referring back to the chimera metaphor, this would be like describing only one animal, such as a lion. Imagine how much improved and relevant research would be if you were only studying one disease. Makes sense, doesn’t it?

*List of diseases that can be misdiagnosed as CFS (other than M.E.) - mind blowing! http://www.hfme.org/meandmisdiagnosis.htm

The National PR Campaign for ME is in progress. We are fundraising as we go along, so if you want this campaign to continue past February, we need your donations now! Our goal is an additional $5000 for a total of $15,000 on the leaderboard by February 21, 2015.

“…using the symptom frequency and severity cutoff points as specified by Jason et al. (2010), only 50% met the ME/CFS criteria.”

“However, the current study suggests that about 75% of patients meet the ME/CFS criteria, as this percentage was replicated across three samples when the DSQ was used as the assessment instrument.”

“These consistent findings across the three data sets suggest that about three fourths of those within disparate samples meet the case definition for ME/CFS, whereas the Fukuda et al. criteria identify a larger group of patients.”

In a different sample in the Jason et al. [4]  study (the 2004 one), only 50% met the ME/CFS criteria when the symptom frequency and severity cutoffs specified by Jason et al. [13] were employed. However, the current study suggests that about 75% of patients meet the ME/CFS criteria, as this percentage was replicated across three samples when the DSQ was used as the assessment instrument.