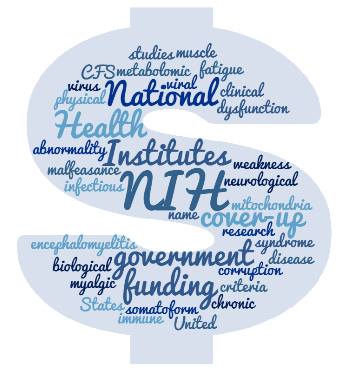 See bottom of blog for updates.

The myalgic encephalomyelitis (ME) community became aware November 3, 2016 that the U.S. National Institute of Health’s (NIH) ME/CFS Interest Group had scheduled a lecture, “Chronic Fatigue Syndrome in Historical Perspective,” by Edward Shorter, Ph.D. to take place on November 9, 2016 (see here for original event).   This was discovered through Dr. Maureen Hanson’s tweet about the lecture to the community. Dr. Shorter is a professor of history and psychiatry who has been an open proponent of the misguided belief that myalgic encephalomyelitis/chronic fatigue syndrome (ME/CFS) is a somatoform condition.

Shorter has written a book about psychosomatic disorders, From Paralysis to Fatigue -”a fascinating history of psychosomatic disorders shows how patients throughout the centuries have produced symptoms in tandem with the cultural shifts of the larger society. Newly popularized diseases such as "chronic fatigue syndrome" and "total allergy syndrome" are only the most recent examples of patients complaining of ailments that express the truths about the culture in which they live.”  In addition, he has written various articles and comments on articles which spew the same lies about the organic neuroimmune disease, ME.

It is not surprising then, that ME patients and advocates became outraged at the fact that the NIH would choose a proponent of the psychosomatic view of the disease to lecture  NIH researchers at the NIH Clinical Center about the history of the neuro immune disease ME.  Patients and advocates immediately sent letters to the NIH ME/CFS representatives, expressing their shock and asking the NIH to cancel Shorter’s speaking engagement.

The following is the reply from Dr. Koroshetz to those who wrote in to complain:

Dear members of the ME/CFS community,

I appreciate the concern of many in the ME/CFS community as expressed in Ms. Spotila’s blog post concerning the visit and lecture by a Professor of the History of Medicine at the NIH intramural research program. It is important to understand the NIH’s commitment to reduce the burden of illness for people suffering with any illness regardless of its cause or its manifestations. In fact the study of one condition not infrequently leads to clues to the treatment of another in totally unpredicted ways. The exchange of information and widely divergent scientific opinions followed by critical analysis is essential to moving any field forward. Investigators at NIH regularly invite individuals to conversations about their areas of interest. This inclusion in scientific conversation is not an endorsement. Rigorously collected data that enables causal inference is the foundation of science. This remains the foundation of the NIH, and as stated from the start the NIH intramural investigators will focus on post-infectious ME/CFS in order to closely examine the clinical and biological characteristics of the disorder and improve our understanding of its cause and progression.

I hope that the ME/CFS community can endorse this scientific enterprise as we at NIH try to direct it to the problems faced by those who suffer with ME/CFS, both here at intramural research program and at universities and medical centers across the country. We know so little about the biological causes and nature of the disease that inclusivity of scientific thought will be critical to our success. At this point sadly we don’t know where the scientific enterprise will lead us, how long it will take, or from what area of research effective treatments will come.

The Professor mentioned in your letter was initially incorrectly listed as part of the ME/CFS Special Interest Group, which was corrected. The speakers that have come to the ME/CFS investigators are listed on the website at (http://mecfs.ctss.nih.gov/sig.html) and include:

On behalf of the Trans-NIH ME/CFS Working Group

So, basically, what we hear Dr. Koroshetz is saying:

NIH, subsequently removed the event announcement of Dr. Shorter’s lecture sometime during the night of Nov. 3, 2016 or morning of Nov. 4th CST. Here is link to the NIH event page as it appeared on November 4, 2016 8:02:52 PM UTC.

To clarify, Koroshetz’ carefully worded his response attempted to side-step the complaint. He stated that Shorter was not part of the ME/CFS Special Interest Group and this would be corrected. The event announcement actually said that the ME/CFS Interest Group invited Shorter. It never said that he was part of the group. The event was announcing that Shorter's lecture was for NIH researchers, not that it was a meeting of Shorter and the group.
Dr. Koroshetz’ reply is not surprising.  It is just more of the same dismissing the voice of the patient community and repudiation of the biological nature of the disease.  After all, this is the same NIH that hires and continues to employ investigators like Drs. Brian Walitt, Fred Gill, and Leorey Saligan.

These NIH investigators all spew the same unscientific theory about ME patients - portraying that it is just the patients’ thoughts that make them think they are sick, that they are catastrophizing and attention seekers. These investigators’ hypothesis that psychosomatic diseases have an altering effect on biological processes is suspiciously similar to Shorter’s university bio webpage quote, “Melancholia as a distinctive illness in its own right, with characteristic biological markers.”

This is the same NIH that worked with the CDC to re-write the origin of the disease.

Step 1) Take a name (ME) and twist it (CFS) to imply it is not a disease but a symptom of fatigue rather than an acquired disease with immune abnormalities as seen in the Lake Tahoe outbreak.  (See Osler’s Web by Hillary Johnson, and our ME science resource page).

Step 2) Define the disease with overly broad and faulty criteria so the psychologists/psychiatrists can now diagnose those with depression and somatoform disorders as CFS. NIH’s Dr. Straus and CDC’s Dr. Fukuda purposefully created the currently used Fukuda criteria so that those with somatoform disorders would fit under the CFS Fukuda criteria and be diagnosed as CFS. Thus muddying the cohort even further and resulting in confusing and unreliable research under the name CFS.

More alarmingly, these investigators were selected by NIH to work on the NIH ME/CFS Clinical Study.  Dr. Walitt has been given the distinguished position of lead investigator! (see MEadvocacy.org's blog -NIH Sidesteps Critical Problems with the ME/CFS Study for details).  NIH director, Dr. Francis Collins, and Dr. Walter Koroshetz  disregarded the protest by the ME patient and advocate community via petitions and letters demanding that these problematic investigators be removed from the NIH ME/CFS Clinical Study.

Additionally, the demand by ME patients and advocates to have input into the NIH study from the planning stage throughout all the steps of study have fallen on deaf ears as well. (The creation of small patient focus groups on specific subjects does not qualify for ongoing patient input from start to finish.)

The time has come for the ME community to face the facts of the dangers of the current NIH's leadership understanding and beliefs about ME.  This is also why as outlined in MEadvocacy's blog, it is crucial to use the international experts' criteria [ICC]* to distinguish the neuro-immune disease ME, as opposed to the "fatiguing condition" as described by the other criteria.

Whereas, we do agree that NIH's invitation to Dr. Shorter to present a lecture at the NIH is inappropriate, damaging and should be canceled, it pales against the harm to ME patients from the ongoing employment of problematic investigators at the NIH and their assignment to the NIH ME/CFS Clinical Study.

It is clear that without congressional intervention this malfeasance will continue unhindered. The ME community needs to testify to congress about this ongoing malfeasance and medical harm to their constituents.  A congressional hearing may be the only way our voices will get heard.

WHAT YOU CAN DO:

Volunteer for MEadvocacy by contacting us at [email protected]

Special thanks to independent advocate and MEadvocacy volunteer, Gabby Klein, for co-writing this blog with the advisory committee.

* In addition to the ICC criteria, expert advocates also support use of Ramsay’s ME definition due to its development based on patients in epidemic cohorts. (Added as if as of Nov. 8, 2016)Here are additional patient/advocate letters in regards to protesting Dr. Shorter’s lecture at the NIH Clinical Center:
MEadvocacy.org Advisory Committee & patient advocate Gabby Klein Letter to Koroshetz:

http://www.meadvocacy.org/our_response_to_dr_koroshetz_refusal_to_cancel_lecture_by_me_disease_denier  (Added as if as of Nov. 8, 2016)Deborah Waroff’s Letters: