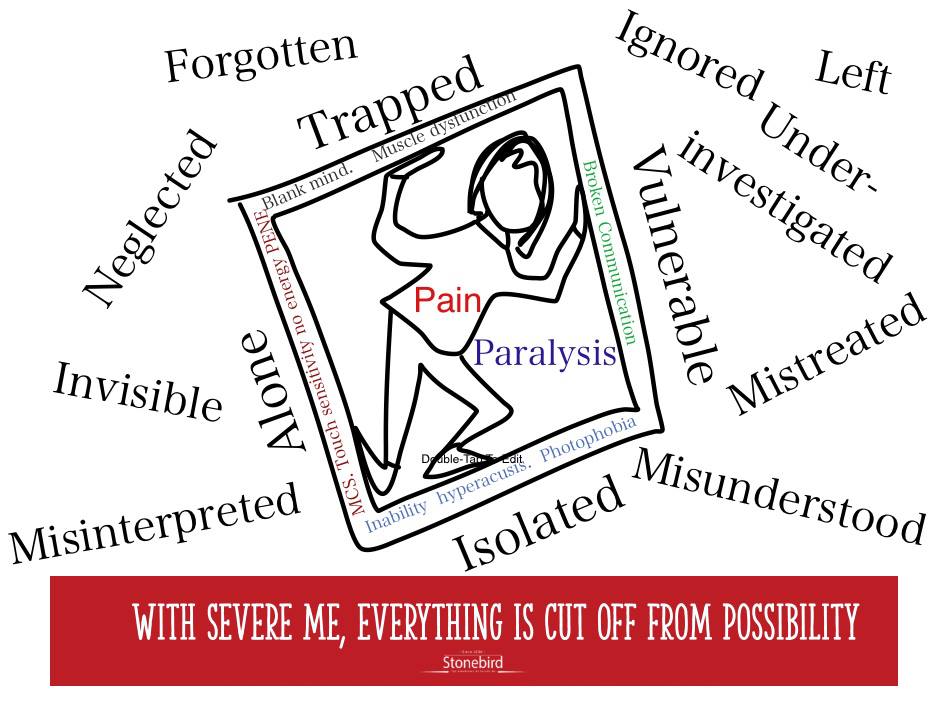 Artwork by Stonebird - raising awareness of Severe/Very Severe ME

“In my experience (ME/CFS) is one of the most disabling diseases that I care for, far exceeding HIV disease except for the terminal stages.” ( Daniel L. Peterson, M.D.)

Myalgic Encephalomyelitis (ME) is a chronic, often severely disabling disease, that affects the autonomic nervous system, immune system, endocrine system, among others. It afflicts over one million people in the United States alone and as many as 17 million worldwide.  ME is a disease that robs individuals of their health, similar to untreated HIV. There are those that refer to ME as non-HIV AIDS - with good cause, as the disease can leave sufferers confined to a bed, with little capacity to fend for themselves.

What many might not know is that one out of four people with ME (PWME) over time become so ill as to not only be disabled, and not just housebound, but completely bedridden. These patients struggle to do what most take for granted like brushing one's hair without gasping for air, feeding themselves, or getting to the bathroom unassisted. For them, life is reduced to survival, with the 4 walls of their bedroom becoming their prison, and the outside world a faded distant memory.

Chances are that many people have met someone that has gone on to develop ME, and they don't even know it because those with Severe ME end up disappearing into darkened rooms and rarely seen.

August 8th was a day dedicated day to raise awareness of the plight of the severely affected ME patients.

“Research has shown that ME/CFS has been found to be more disabling than MS, heart disease, virtually all types of cancer, patients undergoing chemotherapy or hemodialysis.” - (Prof. Malcolm Hooper and Eileen Marshall)

Most researchers agree ME manifests in three categories: Mild, Moderate and Severe. To date there is no cure and no meaningful universally effective treatments. For many of the sick undone by Severe ME, there is little more to look forward than darkened and hushed rooms (due to light and sound sensitivities), and incapacitating weakness, absolute exhaustion, and far too often, unrelenting pain.

Severe ME for loved ones, means…

...they need help with personal care

...cannot walk and even turning over in bed is painful

...unable to cut their own food, even a banana

...many are forced to use BOTH hands to lift a small plastic drinking glass

...daily water rationing for many because they lack the strength to walk the 10 steps to the bathroom

...being too weak to brush their hair or teeth

...requiring dark towels be taped over the black-out curtains in their bedroom, because the stimulation of even a few pinpricks of light can prove agonizing

...speech reduced to whispering, if sufferers can muster the strength to speak at all

...being tube fed. For many Severe ME patients, the ability to feed themselves eventually slips away.

The plight of these severe patients has been misunderstood, trivialized and even disbelieved. They suffer in silence, in darkened rooms because their hyper-sensitivities to light, sound and touch make it impossible for them to lead a normal life.  Severe ME patients are seldom seen by a doctor because they cannot travel to a doctor’s office. Consequently, they have not taken part in studies and their unique symptoms have been missed or ignored in the medical literature for the disease.

Some of these symptoms include seizures, paralysis, intractable pain, blackouts, coma-like experiences, incontinence, tremors, cardiac dysfunction, dyscalculia, and dysphasia.  By neglecting these severest patients, the medical community - and especially government health agencies - have done a great disservice to ME patients.

This neglect has arguably compromised the ability of government health agencies  to develop proper disease criteria.  It is hard to imagine any other illness having their severest patients omitted from research studies, criteria development, and even choosing a name for the disease!

“Our (ME/CFS) patients are terribly ill, misunderstood, and suffer at the hands of a poorly informed medical establishment and society” (Nancy Klimas, M.D.)

To bring awareness to Severe ME, August 8th was selected because it was Sophia Mirza’s birth date. Sophia died in 2005 from Severe Myalgic Encephalomyelitis at the young age of 32, many feel as a result of medical abuse and ignorance. Shockingly 13 years later, this medical abuse is still going on even today.  This date was chosen in remembrance of Sophia and all those whose lives were shortened because of ME.

The devastating symptoms of these Severe ME patients still are not understood by many in the medical profession. The result for many Severe ME sufferers has been catastrophic. Due to medical and societal ignorance, ME patients have been inappropriately “sectioned” as mental patients against their will, despite suffering no mental illness. Children and young adults with ME have been forcibly taken from their parents and denied proper medical care as per ME expert clinicians.

Medical education about the true nature of this disease is the only way forward to make sure the atrocious abuse of these severely ill patients stops.

Awareness of the severity of ME is growing and the need to include the severe patients in current studies has been acknowledged.

Sue Dremann wrote an article in the Palo Alto Weekly:"Living on Empty: Chronic Fatigue Syndrome Saps its Victims But New Research May Find the Cause. It features three ME sufferers, with a focus on a very severely affected patient, Whitney Dafoe, the son of Dr. Ron Davis.

The End ME/CFS project of the Open Medicine Foundation has started an “ME/CFS Severely Ill, Big Data Study”.  This study will conduct a comprehensive, “Big Data” analysis on severely ill patients with the goal of finding sensitive and distinctive molecular biomarker(s).

The geneticist, Dr. Ron Davis of the Chronic Fatigue Syndrome Research Center (CFSRC) at Stanford, has recruited Nobel laureates James D. Watson, PhD and Mario R. Capecchi, PhD among others as advisors to create what he envisions as a collaborative ME/CFS research effort akin to the Human Genome Project. Dr. Davis started the the Open Medicine Foundation's ME/CFS Severely Ill Big Data Study (May 2018 Progress Update). Currently, there is no other severe patient research study being performed in the US. This is the first and only one.

Other Severe ME links…

Please use #SevereME on twitter for this special day