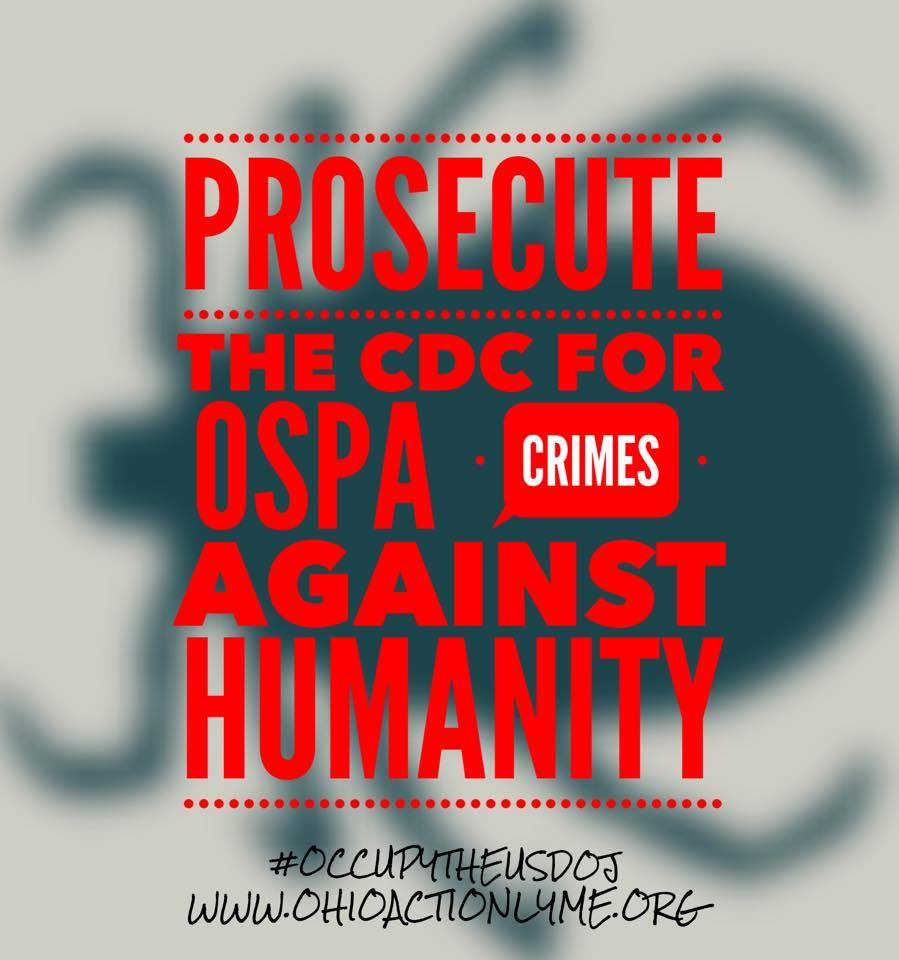 Disabled and Chronically Ill Americans to

Groups of chronically disabled patients, victims of medical abuse, will be assembling for a peaceful but passionate protest on the steps of USDOJ, 950 Pennsylvania Avenue NW, Washington, DC 20530, from June 1 until July 4.

They are charging the USDOJ with failure to act on a whistleblower’s complaint accusing of research fraud and falsification of information for personal financial benefit as outlined below. Facts sheets reveal rampant fraud and racketeering within the CDC and private entities.

The Occupy leaders state in their criminal charge sheets that there is a common disease mechanism linking Myalgic Encephalomyelitis (ME), Chronic Fatigue Syndrome (CFS), Lyme Disease, Gulf War Illness, Fibromyalgia and Autism.  Exposing this mechanism reveals rampant fraud and racketeering within the CDC and other entities, as well as the cause of the autism pandemic.

Through a massive compilation of published scientific research and public-record documents, a group known as the Society for Advancement of Scientific Hermeneutics (SASH), makes a convincing case for these illnesses sharing a common mechanism of fungal-induced immunosuppression, known to the National Institutes of Health (NIH) as "Post-Sepsis Syndrome." They report that such immunosuppression leads to the chronic reactivation in the central nervous system of multiple viruses such as Epstein-Barr Virus (EBV), Cytomegalovirus (CMV), and HHV-6, leading to cancers and an AIDS-like disease. SASH further shares evidence that the interaction of fungi with attenuated viruses in vaccine vials causes the reactivation of those viruses and ultimately, the diseases they are meant to prevent.

The group's primary charge centers on the USDOJ's failure to take action on a whistleblower complaint that was filed in July 2003 by Kathleen Dickson, a former analytical chemist at pharmaceutical giant Pfizer. Her complaint alleged that CDC officers, Yale University medical faculty and others committed research fraud to falsify the current, Dearborn case definition (2-tiered) in order to falsify the outcomes of the OspA vaccines, namely LYMErix, which was pulled from the market after an FDA ultimatum to the manufacturer.

Ms. Dickson's complaint further alleged that the very same government employees who committed these crimes stood to gain substantial financial rewards from a monopoly on all tick-borne diseases, vaccines and test kits. Additionally, their falsification of the Lyme disease case definition and treatment guidelines have left 85% of actual Lyme sufferers unable to obtain diagnosis, treatment, or insurance coverage for their AIDS and cancer-like illness.

An abundance of scientific and historical evidence is presented in the charge sheets. Many of the citations refer to the alleged criminals' own peer-reviewed, published research papers and patent documents, which paint a chilling picture of the extreme effort that SASH says has been made by the alleged criminals to deny basic healthcare to an estimated 30 million sufferers in the United States. They say that the extent of deceit and corruption, with intent to deny an illness, goes far beyond anything that occurred in the early days of AIDS activism.

The group is calling on USDOJ to prosecute for the fraud and racketeering charges.

These criminal acts have left millions of people to suffer in isolation while being ridiculed by doctors, family members and employers as psychosomatic or lazy. The victims, often bankrupted by the high cost of out-of-pocket medical expenses, and unable to work due to illness, and many suffering with such unmanageable severe pain; frequently commit suicide to escape their continuous denial of basic human rights and lack of basic care and pain management.

For additional information and to view the charge sheets, visit ohioactionlyme.org.

May12.org is endorsing this protest, and is dedicated to raising awareness of complex immunological diseases such as Myalgic Encephalomyelitis, Chronic Fatigue Syndrome (ME/CFS) and Chronic Lyme disease.