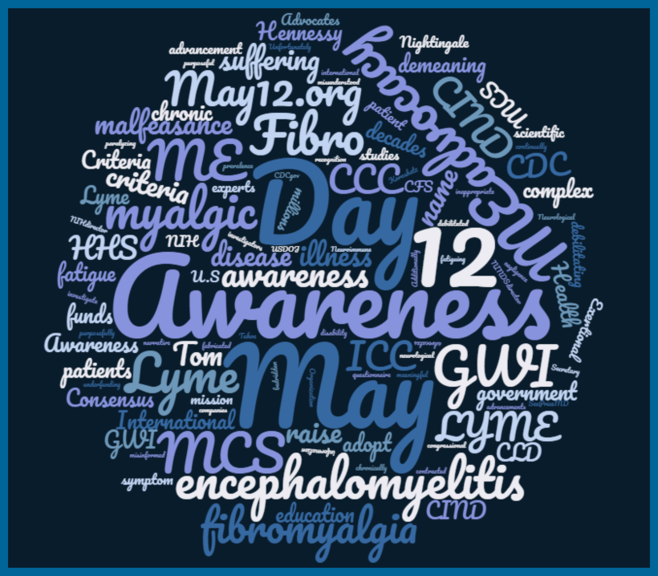 History of May 12 International Awareness Day

Tom chose May 12th to memorialize the birth date of Florence Nightingale, the English army nurse who inspired the founding of the International Red Cross. Nightingale contracted a paralyzing CIND-like illness and became chronically ill. She spent the last 50 years of her life virtually bedridden, and despite being severely debilitated, started the world’s first school of nursing.

The Need to Raise Awareness for Diseases

Advocates for diseases have the challenge of raising awareness about the plight of their patients in order to educate the public and to raise much-needed funds for research and aid. Advocates for misunderstood and neglected diseases, such as the CIND diseases, have an added urgency to educate because of all the obfuscation and government health agency malfeasance impeding proper diagnoses, treatment, and a possible cure.

Fibromyalgia is characterized by chronic widespread pain and a heightened pain response to pressure. Due to the pharmaceutical companies’ advertising drugs for fibromyalgia, this illness has gained wide recognition.  Unfortunately, due to lack of proper medical education about these diseases many patients who have ME or Lyme have been misdiagnosed with fibromyalgia leading to inappropriate and harmful treatment recommendations - such as drugs with adverse reactions and exercise which is contraindicated in patients who have ME.

Symptoms are similar to myalgic encephalomyelitis and chronic Lyme disease, leaving many veterans too ill to work.  GWI patients have too often been ignored by the VA despite evidence of the serious biological nature of this illness.

Lyme disease or neuroborreliosis has left millions of people to suffer in isolation with an AIDS-like illness similar to post-sepsis. Victims are frequently misdiagnosed or denied any diagnosis at all.

The only CDC-sanctioned Lyme disease testing is ANTIBODY based. People whose immune systems are destroyed (immunosuppression) don't produce the required antibodies to get a positive test. The “Dearborn” case definition was put in place in 1994, when the now-failed Lyme vaccine, LYMErix was in the trial stage and it became known that the antigen used (a highly acylated lipoprotein, TLR2/1 agonist; triacylated, that's also shed by the organisms that cause Lyme disease) was causing adverse events that looked exactly like what we know as "chronic Lyme disease" or "post-treatment Lyme disease syndrome”.

The one priority needed in order to open up the floodgates so all Lyme victims may receive proper recognition, their disability payments, and correct treatment:

TruthCures is demanding a prosecution.

Many patients with these complex immunological & neurological diseases also suffer from MCS which is a debilitating disease leaving people unable to participate in society due to severe reactions to environmental toxins.

The Specific Challenge of Raising Awareness for ME

There are an estimated one million men, women, and children in the U.S. suffering from the complex neuroimmune disease ME. The majority of patients are so adversely affected as to render them disabled from any work with 25% totally bedbound! The hallmark symptom for ME is Post-Exertional Neuroimmune Exhaustion (PENE) often called Post-Exertional Malaise (PEM).  Because of this symptom, activity exacerbates the illness.The reason why ME patients have been suffering without any FDA approved treatments for decades -  some dying young, others bedbound or disabled from work - is due to the negligence and malfeasance perpetrated by the US government health agencies.

Facts that have caused the sad state of affairs of ME:

How to Raise Awareness

We need to raise public awareness about the malfeasance of HHS with regard to their negligence, purposeful distortion of the facts, and gross underfunding of ME and all complex immunological & neurological diseases.  This can be accomplished by:

MEadvocacy is a project of May12.org, whose mission is to “raise global awareness and education for Complex Immunological and Neurological Diseases (CIND).”

MEadvocacy continues our mission to get the name, myalgic encephalomyelitis, recognized in the U.S. as it has appeared and been coded for decades at the World Health Organization (WHO).