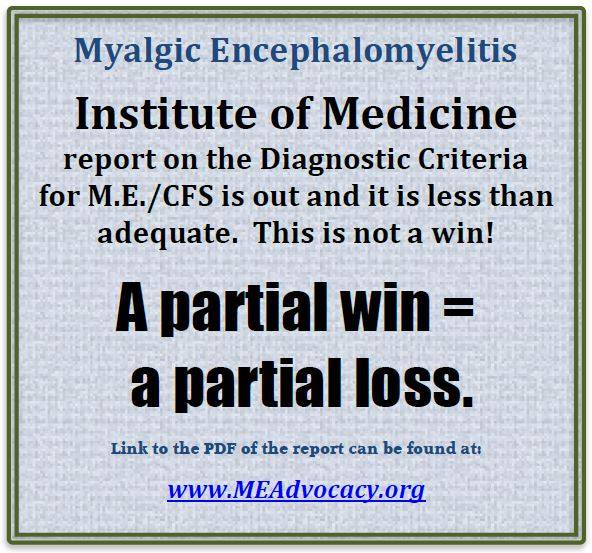 The Institute of Medicine Diagnostic Criteria for ME/CFS was released on February 10, 2015. ME patients have been busy studying the report and its ramifications.

If you missed the webcast, it's available here: http://www.iom.edu/Reports/2015/ME-CFS.aspx

A link to the report: Beyond Myalgic Encephalomyelitis/Chronic Fatigue Syndrome: Redefining an Illness

The report is also available on our Resources page. http://www.meadvocacy.org/resources

While some aspects of the report are positive, the recommendation to change the disease name from chronic fatigue syndrome to systemic exertion intolerance disease (SEID) is particularly bad. Public response to the media blitz surrounding the IOM report has revealed that this is an even worse name than chronic fatigue sydrome. Where CFS suggests merely being tired, SEID suggests being lazy.

Of course, ME patients are neither of those, nor are they "afraid of exercise". They are in actuality suffering from an extremely serious and debilitating neurological disease most similar to multiple sclerosis. An inappropriate name has had much to do with disbelief from the public and doctors, and the inability to get traction with increased federal research funding, and thus the research necessary to discover the etiology and treatments for this disease - a vicious cycle.

We are working with our PR firm, Crowds On Demand, to address the issue with the name SEID.

We are also working on developing a list of demands going forward. The PR firm will also help us with the implementation of these demands.

The next challenge will be the release of the final P2P report, due out in mid February (right around the corner, folks!)

The National PR Campaign for ME is in progress. We are fundraising as we go along, so if you want this campaign to continue past February, we need your donations now! Our goal is an additional $5000 for a total of $15,000 on the leaderboard by February 21, 2015.