Instead of Sending Me a Holiday Message... 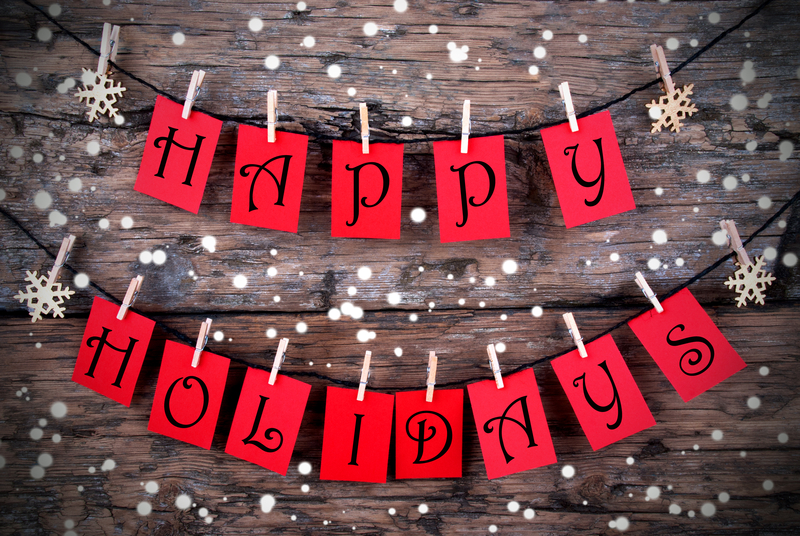 One of our MEadvocacy.org volunteers, Sonya Irey, recently had a birthday.  She requested in place of a happy birthday post from her Facebook (FB) friends and family, that they help with myalgic encephalomyelitis (ME) advocacy efforts.

We thought this was such a great idea, we wanted to share it in hopes that you can make a similar request.  Please feel free to copy and paste into your own FB post or e-mail.  You may personalize this message, such as replacing ME with ME/CFS (myalgic encephalomyelitis/chronic fatigue syndrome) because some of the recipients of this message recognize ME/CFS as the term currently used to designate the disease ME.  As MEadvocacy.org, we prefer the disease name Myalgic Encephalomyelitis, since we correlate the disease name to the specific diagnostic criteria the Canadian Consensus Criteria (CCC) or International Consensus Criteria (ICC).

Below is based on Sonya’s birthday post (shared here with her permission) with some changes made by MEadvocacy.org.

The Holiday Season is fast approaching, and I'm asking for one small gift from all of my family and friends. In the same amount of time it takes to post a holiday message, would you instead please:

1. Go to www.contactingthecongress.org, enter your zip code, and click on the Contact Forms for each of your reps. Copy and paste the letter below to tell Congress that you support ME research. It would mean so much to me to have your support!

2. Click on the MEadvocacy.org link: Constituent Letter to Congressperson oneclickpolitics.com to tell Congress electronically that you support ME research. It literally takes about 5 seconds and help MEadvocacy reach their goal. 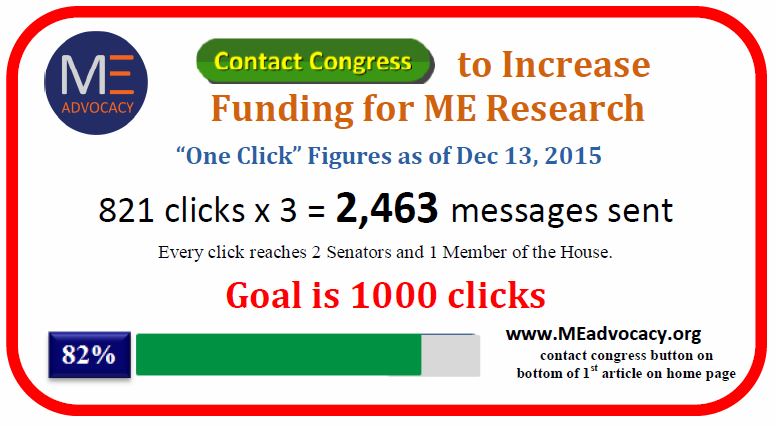 3. Sign the #‎MEAction funding equality petition at http://www.meaction.net/funding-equality-petition/. Americans and foreign nationals can both sign. Just click on either U.S. or Global, then go to Your Location and enter your zip code. Then, click Sign the Petition. This literally takes about 10 seconds.

4. Please also consider sharing this post to your wall and encouraging your friends to help.

Doctors who treat both AIDS and ME say they'd rather have AIDS. People often compare the ME battle for recognition, funding, and treatment to the AIDS movement. Yet there's almost no public funding for ME research. So I'm asking for your help. It's people like you, who know someone with ME, who can spread the word and make a difference for me and others with this terrible disease. Thank you, my friends, for caring and making this a truly meaningful holiday.

You can find out who your reps are at www.contactingthecongress.org.

I am writing to you as a constituent and deeply concerned citizen. I need you to be a champion in Congress for the severely debilitating, chronic, neuro-immune disease Myalgic Encephalomyelitis (ME), mostly known in the U.S. as Chronic Fatigue Syndrome (CFS). ME patients are too sick to advocate for themselves. So, despite recent media attention, this condition doesn’t have the widespread awareness that other severe diseases do. That’s why political action on ME patients’ behalf is so vital. Specifically, I need your help to increase National Institutes of Health (NIH) funding and to modify Department of Health and Human Services (HHS) diagnostic criteria for this horrific disease.

An estimated one million Americans suffer from ME, a long-term disease that primarily targets young, previously healthy adults from diverse ethnic and socioeconomic backgrounds. The disease is so severe; it renders a quarter of its patients bedbound and unable to care for themselves. More than half are disabled and can’t work, attend school, or participate in daily life activities. ME patients do not spontaneously recover. The U.S. Institute of Medicine (IOM) calls patients with ME “more functionally impaired than those with type 2 diabetes, congestive heart failure, [or] multiple sclerosis.” Doctors familiar with both AIDS and ME say they'd rather have AIDS. The Centers for Disease Control (CDC) estimates ME’s annual burden on the U.S. economy to be $17-24 billion. However, the NIH consistently places ME at the rock bottom of its budget, with barely $5 million/year. This is less than the NIH allocates for hay fever, and is nowhere near its allocation for other similarly burdensome diseases:

As a result, ME still has no known cause, no FDA-approved treatment, and no cure. The lack of progress in ME research over the past 50 years is appalling, and is reflected in the absence of a standard of care for ME or even a knowledgeable response from most medical practitioners when encountering these patients and their families.

The NIH has responded to past requests for increased funding by saying that few researchers are interested in studying ME. However, there are currently Nobel Laureates, several members of the National Academy of Sciences, biochemists, biophysicists, geneticists, immunologists, neuroscientists, experts in public health and infectious disease, epidemiologists, and physicians who are eager and ready to study ME, if adequate funding were available. Many of these researchers have written an open letter to U.S. senators dated 8/17/15, to express their interest and enthusiasm. The letter also notes that there is widespread agreement, both inside and outside the U.S. Government, on the imperative of dramatically increasing ME research resources.

Recently, NIH has stated that it hopes its renewed focus and efforts on ME will lead to more research funding. However, new NIH announcements have not included any additional money. NIH has also said that it can't increase ME funding because it doesn't set specific budgets for individual disorders. Yet, the NIH does set specific budgets for its Centers and Institutes, including its Cancer Institute, Institute of Diabetes & Digestive & Kidney Diseases, Institute of Arthritis & Musculoskeletal & Skin Diseases, etc. The NIH also issues RFAs with specific budget commitments, and it develops internal Institute concepts and initiatives with specific budget estimates. The problem is that ME is not part of this budget planning process. ME doesn't have a "home" institute or center, and it hasn't had a new RFA in over 10 years. Accordingly, these deficiencies need to be corrected if NIH is to realize its “hope” of increased ME/CFS funding.

To move the science forward on ME, the disease also needs well-defined diagnostic criteria. HHS’s Chronic Fatigue Syndrome Advisory Committee (CFSAC), ME medical experts, ME patients, their advocates, and their families have entreated the HHS to strike its current, overly-broad ME/CFS diagnostic criteria in favor of the well-defined, globally-accepted Canadian Consensus Criteria (CCC), which was established in 2003 by a team of international ME medical experts. The International Association of Chronic Fatigue Syndrome/ Myalgic Encephalomyelitis (IACFS/ME), the field’s professional organization, has officially endorsed and adopted the CCC standards, as have at least 50 ME medical experts, almost 200 ME advocates, and more than 6,000 patients. The 2011 International Consensus Criteria (ICC) revision is also well-established and alternatively acceptable.

In conclusion, as a deeply concerned citizen and your constituent, I strongly urge you to use your powers and direct HHS to:

1. Fund biomedical research for ME in the amount of $250 million, which is commensurate with similarly burdensome diseases;

2. Establish authority for researching ME within the National Institute of Neurological Disorders and Stroke (NINDS), which currently leads the Trans-NIH ME/CFS Working Group;

3. Issue a new RFA that sets aside a significant amount of funding for new ME research; and

By taking these four critical steps, you will eliminate the greatest obstacles to finding an ME cure and thereby significantly ease the enormous physical and economic burden of ME on millions of American patients and family members.

Thank you for your attention. I look forward to your response on this matter.

November 2015 Oprah Magazine: Chronic Fatigue Syndrome Finally Gets its Due

10/8/15 The Atlantic: Chronic Fatigue Patients Push for an Elusive Cure

10/5/15 The Washington Post: With His Son Terribly Ill, a Top Scientist Takes on Chronic Fatigue Syndrome

Doctors speak out about ME/CFS:

"[ME/CFS] is one of the most disabling diseases that I care for, far exceeding HIV disease except for the terminal stages.”—Dr. Daniel Peterson, doctor and researcher

“[An ME/CFS patient] feels effectively the same every day as an AIDS patient feels two months before death; the only difference is that the symptoms can go on for never-ending decades.” —Prof. Mark Loveless, Head of the AIDS and ME/CFS Clinic at Oregon Health Sciences University

“Although [ME/CFS sufferers] are ill with a debilitating flu-like illness every day of their lives, neighbors and even friends and family insist they look “just fine.” It’s an unfortunate fact that our culture has yet to accept the harsh reality of chronic disease; often, its ravages are invisible to the naked eye. ”—Dr. David Bell, ME/CFS clinician and researcher

“If I had to choose between the two illnesses [HIV and ME/CFS], I would rather have HIV... My HIV patients for the most part are hale and hearty thanks to decades of research and billions of dollars. Many of my ME/CFS patients, on the other hand, are terribly ill and... experience a level of disability equal to that of patients with late-stage AIDS and patients undergoing chemotherapy… ME/CFS, which impacts a million people in the United States alone, has had a small fraction of the research dollars directed towards it."—Dr. Nancy Klimas, AIDS and ME/CFS researcher and clinician

"We’ve documented, as have others, that the level of functional impairment in people who suffer from CFS is comparable to multiple sclerosis, AIDS, end-stage renal failure, chronic obstructive pulmonary disease.”– Dr. William Reeves, former CDC Chief of Viral Diseases Branch

We the undersigned scientists are writing to express our interest and enthusiasm for researching myalgic encephalomyelitis/chronic fatigue syndrome (ME/CFS), a common and disabling illness long ignored by our nation’s health agencies.

Many of us have had a very difficult time securing adequate funding. Others have been unable to determine even how to apply for funding, as no institute within the NIH has responsibility for researching ME/CFS. The NIH has responded to requests for increased funding by stating that few researchers are interested in studying the illness.

On the contrary there are Nobel Laureates, several members of the National Academy of Sciences, biochemists, biophysicists, geneticists, immunologists, neuroscientists, experts in public health and infectious disease, epidemiologists, and physicians eager and ready to study this disease, were adequate funding made available. The undersigned are just some of those researchers.

We have so much to learn and large studies are needed to understand how to help patients regain their health. With societal costs in the tens of billions of dollars each year, an infusion of government funding could quickly repay that investment.

Currently, ME/CFS is massively underfunded compared to other diseases of similar severity and number of patients. The NIH allocates just $5 million per year to study this illness, which affects between 836,000 and 2.5 million Americans. Patients suffering from ME/CFS deserve funding proportional to and commensurate with other diseases with similar patient populations. The Institute of Medicine, a special HHS advisory committee, and a recent NIH­ appointed expert panel all agree: It is imperative to increase research funding for ME/CFS.

If invited to apply for NIH funding via a new Request for Applications (RFA), we would eagerly submit grant proposals.

Ronald W. Davis, Professor of Biochemistry and Genetics, Stanford University School of Medicine, Member of the National Academy of Sciences