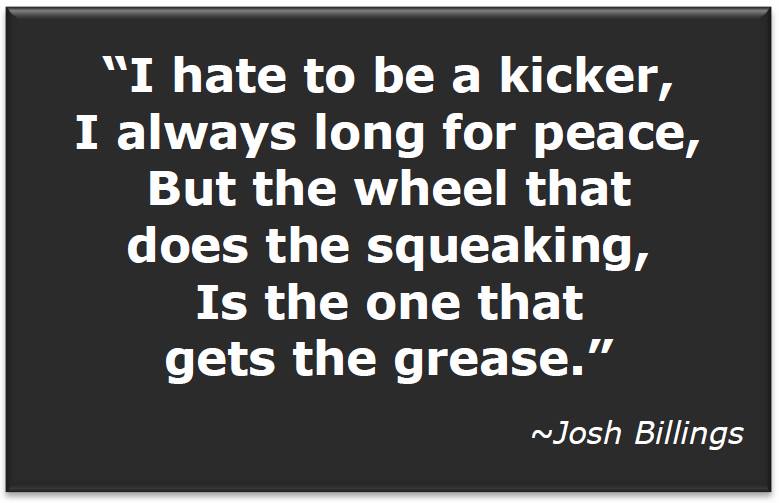 Lately, we have noticed a disturbing trend. Various members of the ME community  have been chastising vocal activists/advocates for being too militant, because they’re afraid that somehow this anger will be used against them, or they just find anger distasteful in general.

The majority of advocates are women. Traditionally, women are socialized to be polite, submissive, and not rock the boat. This leads us to believe that there may be different cultural and social perspectives at play.

In the United States, the First Amendment of the US Constitution guarantees freedom of speech, freedom of peaceable assembly, and the right to petition for redress of governmental grievances.

Americans have been exercising these rights for over 200 years. If past activists had followed the instructions of these patients to behave in a quieter, more polite manner, women still wouldn’t be allowed to vote. There would be no labor unions, African-Americans would still be segregated, and LGBT people would still be in the closet - if the AIDS epidemic hadn’t wiped them out completely.

The tactics being used by the new wave of ME advocates are standard tactics which have been used for over 200 years: writing critical articles, demonstrations, petitions and letter campaigns, with a few new twists like the use of social media and documentaries. There is nothing radical, illegal or immoral going on here. Nobody has barricaded themselves in a federal building with an arsenal of weapons and explosives.

The definition of insanity is to repeat the same tactics over and over expecting different results. The ME and CFS community has been mostly using its “inside voice” for over three decades with the occasional assertive speech at government controlled functions and small demonstrations. If it was going to bring anything more than a few incremental crumbs, it would have worked a long time ago.

Therefore, we must try something different. We don’t know which tactic is going to work, so we must try everything we can think of if we want to be successful. For example:

This doesn’t mean that previous methods should be thrown out the window, but we must also be open to new ideas and tactics, and practice all of them simultaneously.

As we have written previously on various blogs on MEadvocacy.org, we are up against an extremely entrenched institutional bias which believes that our disease is at least partially psychosomatic.  Accordingly, we don’t deserve the sort of robust research and treatment you would give to someone with a “real” disease like multiple sclerosis, HIV or cancer. This is not going to change without a lot of leverage.

Consequently, if we are going to be successful, we must be brave and overcome our fear and distaste of speaking out loudly and boldly. If somebody wants to use that against us, we need to expose these tactics for what they are - not shrink away in fear or attack those who speak out.

Those who chastise advocates for doing their jobs are essentially attempting to suppress their First Amendment rights. So to chastisers who tell us to be quiet, we say - “no”, we will not be polite and submissive because we don’t want another 30 years of the status quo for our disease.